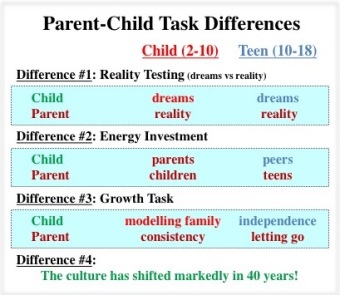 I chose this topic as part of the program because children are a part of the lives of everyone. Children are a source of major joy, and also of significant anger. Children are developing into individuals, and therefore resist the efforts of others to manage them. Thus, responding to children is equivalent to managing the third limb of a triangle — fraught with difficulty.

The task in this email is complex — learning to parent with care and consistency. Be aware that it is easy to become overwhelmed with all the ‘shoulds’ in this field. The bottom line is safety and respect. What are your beliefs as to how children should behave? What are you seeking?

Although most people attempt to parent well, parenting is still an isolated phenomenon within the private family. As children, many of us have been traumatized in families; I certainly had been. As such, most of us received almost no training in emotional or relationship dynamics, other than the emotional field of our own families. Because of this, we are at great risk of recreating such patterns when we themselves have children.

There is a lot I could say about why our culture frequently traumatizes children, but it would take much space. I therefore confine my remarks to skills that are needed in responding to children.

The needs of children are age-dependent; difficulties occur because of inherent age-related tasks. Children have more dreams; parents are more orientated to reality. Younger children are focused on family, learning to model family dynamics; teens are relating to peers, and learning independence. Note the directions children are moving (young children towards parants; teens away) People can only hear you when they are moving towards you; thus younger children listen; teens much less so.

For me, the simplest way to describe all these needs is in terms of safety, energy, and choice (the primary characteristics of the Triune Brain — Email #04). All children need safety (not rules, but boundaries within which they can explore), extensive nurturing (energy which adds to safety), and age-appropriate choice (risking within the boundaries of safety). Between ages 0-2, they principally need safety and nurturing.

Difficulties usually begin with the ‘terrible twos,’ and the ‘trying threes.’ Here the primary need remains safety — children between two and ten simply do not have enough life experience to make good decisions of safety; however, the additional need is to educate them towards good choice. This is called child discipline; however, it is more accurately ‘parent discipline,’ the need to provide consistency of safety and nurturing. Parents have difficulty usually because they want to control energy (the expressiveness of children), rather than safety and choice.

There are two systems I advocate for the younger age group: 1-2-3 Magic (Tom Phelan) and Inner Discipline (Barbara Colorosa). 1-2-3 Magic emphasizes the energy management (positive energy to encourage appropriate behaviours, and absence of energy to discourage undesirable behaviours (criticism is negative energy, and a form of energy reward — as is too much explaining; remember, children want energy, and negative energy is better than no energy). Inner Discipline emphasizes age-appropriate choice. Both systems emphasize safety; both require discipline on the part of parents — consistency of caring, rather than energetic negative reward.

For the age group of 10-18, the child is gradually allowed to assume responsibility and accountability for both safety and age-appropriate choice, transferring safety issues to the older teen — such that adult-adult relations can develop as the child enters their 20s, perhaps as a form of mentoring on the part of the parent. Sometimes, such consistency is encouraging that of risk-taking, and other times is restrictive due to safety concerns.

The most useful way I have of thinking about responding to children again arises from Transactional Analysis, the therapy I introduced in Email #13 Who Are My Sailors? (TA is generally very good at explanations). There I suggested each person consistently has five sailors (nurturing parent, NP; critical parent, CP; adult, A; adapted child, AC; and natural child, NC).

In general, effective communication is with equivalent sailors (e.g., P-P or C-C), and poor communication when levels are crossed (e.g., P-C, P-A, or A-C). Thus, the most difficult situations occur between CP (‘you should’) and AC (‘I don’t want to!’).

Most parenting conflicts occur between CP and AC, a crossed transaction, in which the parent attempts to control the behavior of the child, independent of issues of safety and choice. Given that we all have Child sailors, younger children are predominantly Childs and teens are often Childs (while learning to have Parent and Adult sailors, eventually Captains — effective Adults).

Such crossed transactions are recipes for difficulty, especially with teens. The essential parenting need is Adult — set clean boundaries that you yourself can manage. The most effective way that I know is to ‘out-child’ the child — the skill of playfulness, together with an Adult (to provide safety). Can you be in a state of wonder? Do not lecture (P-C); do not argue (C-C). In each case, you will lose. Set boundaries (A), and wonder how the teen will respond (C).

For example, the teen wants to borrow the car, but never contributes gas. Set the car keys on the table with the instruction that the keys are available when they are replaced with $20 (to be refunded if the car is returned with a full tank of gas); otherwise the keys remain on the table. What will the teen do in response? Probably argue — do not engage. Possibly sulk or cajole — do not engage. Do not lecture. The discipline is to stay with the parameter of: Keys = $20.

Some other reading material to consider. Tom Phelan’s Surviving Your Adolescents is excellent; if possible, find the first edition — better information from my perspective. Also read Change: Principles of problem formation and problem resolution by Watzlawick et al.; it is the primary source whereby I learned to play.

One thought on “Anger #29 Responding To Children”