Comment: As human beings, we have multiple ways in which to block ourselves from the work of living effectively, of living peacefully while honoring each other. 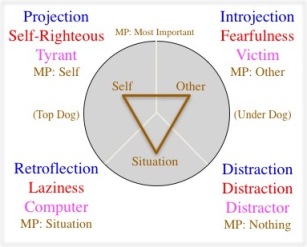 At various times in the past, I have asked individuals if they are aware of what is happening right now. If pressed, most people will tell me what they are thinking; this is specifically NOT what I am seeking as an answer. I am referring to being attentive to the ongoing sensory experience of the moment.

Since the only time I can do something different is right now, then the more I can be present to the moment, the more opportunity I have for change (on any issue, but especially with issues of anger). From my perspective, one of the ways I know I am present right now is that my sensory data is crisp — visual data is clear, sounds are bright, touch is detailed, et cetera. When the data is fuzzy, I am also certainly into my story of the experience, thus somewhat caught in either the past or the future — I am certainly not fully present to the moment.

So, for the next two emails, we are going to explore the various ways in which people block their own awareness (usually as a result of various traumas in childhood) so as to avoid the pain of present experience. These traumas vary from relatively minor (but repeated) criticisms as a child to the horrendous abuse that sometimes occurs. Note: Everyone avoids! We are pain avoiders.

The major blocks are such that the individual then has difficulty maintaining a healthy balance between self and the environment, both in acute and in chronic behaviors. Such improper boundaries then predispose the individual to additional stress that presents itself in a multitude of way: as addictive behaviors, as aches and pains, as chronic diseases, et cetera.

The principal task in this email is for you to identify your own patterns.

There are essentially four patterns, for each of which I will describe (in broad brush strokes):

Please note: Since these patterns are blocks to awareness, you may have difficulty recognizing yourself; if there is someone you trust, sit with them and reflect together on the descriptions that I offer. (We all block in many ways, and we each have our favorites. Hint — the stronger the pattern, the more difficult it will be for you to recognize yourself. It is a block, remember!)

To work with this information, I suggest you associate into a conflict that you have had, and compare what you were feeling and thinking then with the descriptors I am using here. Especially, pretend-act the conflict out. Feel/think which description, which pattern, seems to fit what you were experiencing in this conflict. Do this with several conflicts that you have had. Most people have a favorite pattern amongst the four, and then use a second pattern as a fallback.

When you have a sense of your own pattern(s), consider the other descriptions, and imagine what the other patterns might be like. When might you be in this pattern? Under what circumstances?

I will describe the patterns in the order I consider as reflecting the ease of self-recognition: Introjection, Retroflection, Projection, and Confluence (please see the diagram at the top).

The setting for the descriptions: any conflict. The conflict can be depicted as an Emotional Triangle (Email #12), the apices being any two people and a situation. As well, it can be represented as the Pointing Finger described in Email #09, the thumb and pointing finger being the third limb. And the behaviors can also illustrate the Pressure Cooker effect described in Email #06.

In blocking awareness, the individual generally makes one component (one apex) most important (MP), and the other two of much less importance. In two of the patterns (left side: Projection and Retroflection), the individual functions as if in a position of strength (a dominator — the so-called Top Dog: Blamer and Computer); in the other two (Introjection and Confluence), the person seems much less powerful (the Underdog: Victim and Distractor) — but appearances can be deceiving (more in a future email on intimacy)! Also, the patterns of Projection and Introjection (top patterns) are both heavily invested in responding to shoulds, whereas Retroflection and Distraction (bottom patterns) are both attempting to avoid emotional experience.

Pattern #1: Introjection. In any conflict, the introjector tends to behave as the Victim, acting sad, expressing self-pity (poor me!); on the surface the victim gives power away to the other, disowning self and the situation. He or she catastrophizes about the future, thus Fearfulness is the dominant character. Essentially all of this occurs because the introjector is caught internally with how he or she should be (I should have done better/different/…). The lid of the pressure cooker is very secure, and when stressed, the introjector tends to become depressed (d’pressure is high) as a way to avoid.

Pattern #2:Retroflection. In conflict, the Retroflector is generally calm, cool, and collected, the neutral analyst of the situation, disowning the feelings of both self and other, a good example of a Computer. Stressed, the Retroflector will stonewall or function from Laziness (“Who cares?”). Further stressed, he or she is a Time Bomb, possibly exploding on others, but more likely exploding on self via a heart attack or suicide. Here the avoided pain (the internal conflict, the should) is turned against self, and shows up as nervous tics, headaches, back pain, et cetera. The Retroflector does to self what he or she would like to do to others.

Pattern #3: Projection: The projector makes the environment responsible for what originates in self, becoming the Blamer or the Tyrant or the Boss, disavowing and disowning one’s own contribution, emphasizing the faults of the other. Since story-making of others is a prime characteristic of projection, gossip is a prime place for the projector to function. Stressed, projectors are frequently explosive, potentially violating others, and usually not amenable to rational considerations. Self-righteousness is the arena of the projector. Avoiding the inner pain that characterizes the introjector, the projector shifts the focus to others, in a pattern of suspicion and blame. As a time bomb, the projector explodes.

Pattern #4: Confluence: In the process of confluence, the individual has no boundaries, no separate identity, and uses any form of Distraction so as to avoid contact with others. He or she then appears inappropriate or silly, frequently in a panic, or fully into panic attacks when stressed. Conflict is avoided at all cost. As a time bomb, this is the place of panic attacks.

In the next email, I’ll add more details. And in addition, I’ll give some suggestions that perhaps allow better choices when you recognize yourself as using one or several of these patterns.

Coming next: Blocks To Awareness, Part 2