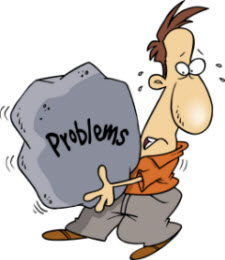 Previously, I written a number of blog posts on the nature of change, and the distinction between difficulties and problems (they start here as of 20160630). I need to add to that, especially with a highly useful concept ( concerning logos, ethos, and pathos) that I encountered somewhere in my career, one attributed to Plato (I’m currently searching for a specific reference).

Anyway, the distinction is that between logical issues (logos), ethical issues (ethos), and emotional issues (pathos). An example will help.

Suppose my toaster is not working, and I want toast.

The Difficulties: In theory (the Logical), I (or someone else) could take the toaster, determine what is the difficulty, and with the right parts, simply fix the toaster, returning it to its functional state. This is the logical approach to a technological difficulty. (Logical resolutions work best with technological issues.)

However, in our culture, it is much more likely I would put the toaster in the garbage (increasing the environmental load), and go to the local store to purchase a new toaster. I bypass the logical.

The difficulty here is that we somehow believe it to be less expensive to do this than to find someone, as above, who has the necessary skills and necessary parts for the repair process. In our complex culture, there is a certain truth to this (it is much less so in a third-world country where many people make their living with such simple repairs — but we are not a ‘third-world’ country!).

To find someone in my city who would be willing to do such repairs and who had the necessary parts (likely needing to be back-ordered rather than immediately available) would take much searching and massive effort as well as considerable time — in the past when I have gone to electrical stores, they have simply said it is cheaper to buy a new toaster.

So with difficulties of this nature, such as the toaster, I therefore do not bring a logical resolution to the logical problem. It is ‘too expensive.’ Instead, I move to the Ethical: I go to a store for a toaster.

In buying the toaster at the store, probably as a very cheap price (because the many environmental costs are ignored), they will give me a warranty for the new toaster — an ethical statement that the toaster is new, and will function without difficulty for a certain period of time. Let’s assume the warranty is good for 90 days.

So I take the toaster home, and enjoy my toast for the next few weeks. But then, the toaster fails, at day 89. I go to the original store where I bought the toaster, together with my original purchase receipt. Then give me a replacement toaster, a new one — mine has crashed within the warranty period, and the warranty guarantees a replacement (meanwhile the failed toaster goes into the garbage — more garbage). This is an ethical resolution to a logical problem (repeating again, as above, that a logical resolution is ‘too expensive.’)

But suppose I have had a busy week, and I do not get back to the store until day 91. What then?

I tell the store that the toaster failed two days ago, on day 89 (and of course, explaining that this was within the warranty period), but I have had a really busy week. So what is the store manager to do?

On the one hand, I’ve brought the toaster back on day 91 — it is out of warranty! It is beyond the ethical resolution!

But on the other hand, thinks the store manager, “if I refuse to give this guy a new toaster, he will leave the store disgruntled, and likely complain to his many friends as to how unfair my store policy is, and I might lose 10 future customers as a result. I’ll give him a new toaster — it’s a cheaper solution.”

So I get a new toaster again. But this is not an ethical resolution — it is an Emotional resolution.

Over the years of my career as a therapist, this distinction between logical, ethical, and emotional has been one of the most useful concepts I have encountered! When I have a difficulty, I ask myself:

Keeping all of these distinctions in awareness is perhaps difficult initially, but with time, very rewarding: