These few posts are on the difficulty I have being retired — I still want to contribute, but largely I find myself being a resource looking for a need. Wanting to contribute has been a life-long pattern for me; most of my career choices have resulted from this. (Most of my relationship issues arose because I did not know how to relate to others — only in the past twenty years have I been more successful in relationship — most of the time).

I also did my PhD from this perspective of needing to contribute. I wanted to take my work to a higher level (unsuccessful), and I wanted to research the issues that had limited me as a therapist (successful).

These issues — laziness and fearfulness on the part of clients (I later added self-righteousness) — showed up with about 25% of clients; people would attend regularly to my therapy groups (sometimes for years), but some would sit like bumps on a log, almost never openly engaging in their own work. Some would do work, but somehow never at the depth needed.

Without being pejorative or judgmental, I came to think of these people as affected by laziness or fearfulness. If given simple tasks, they would forget or be too busy (laziness) or they might tell me of being afraid of the consequences of doing the tasks (fearfulness). Nothing I did as a therapist would change this. For example, I recall one guy who worked for me for four years, almost never actively participating, when one day, he spontaneously said: “I finally get it. I have to do the work! You can’t do it for me.” Wow.

As I studied these issues, I came to think of laziness and fearfulness as spiritual or existential issues. They were simply life choices as to attitude, choices made to avoid the pain of living. My only resource as therapist was to challenge the client — by pointing out the pattern. If then the client chose to do the work, to act in spite of the laziness or fearfulness, the work was relatively easy. If the client chose not to do so, there was nothing I could do besides acceptance and the provision of safety.

Because of my knowledge of emotional triangles, I was very aware of the maxim: Don’t push the River; it flows by itself. (However, from time to time, I do get caught wanting to push.) 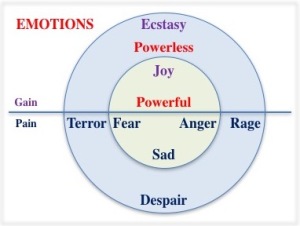 When I still worked as a therapist, most of my work was with anger management, but the processes I used were easily translated to all emotions. For me, emotions are simply life energy to which I give meaning and direction. If I believe I am not safe because of what you are doing (and still have some sense of my own power), but meanwhile I believe that you are more powerful than I am, I call my energy fear (F) — I want to move away from you. If I believe I am more powerful than you, likely I will call my energy anger (A) — I want to move against you. Or, if I sink down (usually because of internal conflict), I call my state sad (S). Thus, when in explaining emotions to others, I diagram them with a circular graph (wherein I also include joy).

I make a major distinction concerning emotions when I feel powerless. Here I experience my emotions as much stronger, perhaps overwhelmed by the intensity — I give them different names: terror (T), rage (R), despair (D), and ecstasy (E). 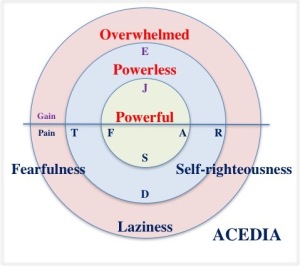 The issues I wanted to study for my PhD (laziness, fearfulness, and self-righteousness) are also emotions, although they are usually described as behaviors. They would show up with particular clients — people who would attend regularly (sometimes for years), but somehow would not engage in the work. Nothing I did as a therapist would change this.

As I studied these issues, I came to think of laziness and fearfulness as spiritual or existential issues. They were simply life choices as to attitude, choices made to avoid the pain of living; these choices occur when we are chronically overwhelmed by our emotions — we numb out, and thus these states come to seem like behaviours.