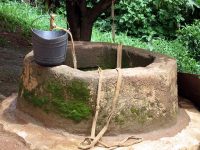 To continue my musings concerning daily life in a mature culture — I am suggesting that human beings would essentially live within small village-like environments, nested within larger communities which would provide more sophisticated resources.

If we were to do away with most of the consumerism of our current society and live such that much of what was needed was provided in modular fashion, I imagine that work life would be greatly simplified with fewer daily hours of toil, and much greater opportunity for creative endeavors. I am going to assume that the work week would be five days of five hours each, with shift work as necessary for some tasks (perhaps many tasks). With good technology, many tasks could be accomplished electronically, and many meetings attended electronically. So I will assume that the average person leaves the local village environment three days a week, and remains in the local environment for the other two (see future posts for some exceptions).

I also assume that if I lived in a culture that truly honored personal development and the effective resolution of conflict, much of my work time would actually be pleasurable. If education was not a limitation, most people would devote their time to the creative aspects, leaving the drudgery to robotics, for example. Thus I would not be exhausted at the end of work, whatever the type of work. One of the aspects of being a therapist that I really enjoyed was that essentially I was paid to do my own emotional growth work, exploring with others as they struggled with their own issues, but at the same time providing creative opportunity for me — thus it was seldom that I came away feeling exhausted (almost exclusively this occurred when I was caught in my own issues with the client, wanting them to change so as to fix my own pain).

Effectively living a 25-hour work week, without the hassles imposed by consumerism, leaves a huge amount of time! How might I spend it?

My first question: how many hours do you the reader spend on your own personal development? How many hours would be needed, especially if you were truly committed to the Truth Quest as described by Herman?

In the early days of my mid-life transition when I was in my 40s, I was dealing with much of my own personal pain. I found I needed three hours a day for my own personal work — an hour of meditation, journal-writing, and yoga. On top of that I also needed to spend at least another 8-10 hours a week engaged in my own therapy. At a later stage of my life, when I was creatively engaged in my work as therapist, I needed about an hour and a half: half an hour of each discipline. Now, towards the end of my eldership transition, I need about two hours a day. In both of these latter aspects, the creativity replaces the need for therapy.

So, on average, my answer as to how much time is needed for personal development is:

That may seem like a lot of time — but given that human beings are pain avoiders (and hence often avoid both personal development and the seeking of conflict resolution — both of which are often painful), it will be necessary time. As a species, we must do the work of overcoming our propensity to viciousness and self-righteousness; giving lip service to life change, and all the suggestions of what we should do, will not provide the outcomes we need.